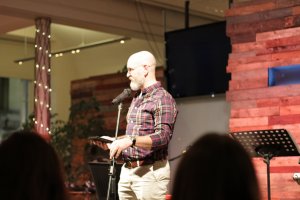 At our 10th anniversary thanksgiving service, Alastair Duncan, minister of SGT Church in Glasgow, spoke about the importance of storytelling in our culture. Some people have asked for a copy of what he said as they found it very helpful as a reflection on their own vocational call to work in theatre and the arts. Here is a version of what he said that night:

In 1964 Gene Roddenberry sold Star Trek to NBC as a classic adventure drama, calling it A Wagon Train to the Stars. But Roddenberry wanted to tell more sophisticated stories, using futuristic situations as analogies for current problems on Earth and showing how they could be rectified through humanism and optimism. The series’ writers frequently addressed moral and social issues such as slavery, warfare, and discrimination. The opening line “to boldly go where no man has gone before” is almost verbatim from a U.S. White House booklet on space produced after the Sputnik flight in October 1957.

Star Trek‘s contributions to television history include giving women jobs of respect, most notably through the casting of Nichelle Nichols, a black actress, as Uhura, the ship’s communications officer. Black actresses at that time on television were almost always cast as servants. In fact, Whoopi Goldberg recalled that the first time she saw Uhura, she excitedly told her mother: “Mama, there’s a black woman on television and she ain’t no maid!” In an interview, Nichelle Nichols, who played the black female communications officer, said that the day after she told Roddenberry she planned to leave the show, she was at a fund-raiser at the NAACP and was told there was a big fan who wanted to meet her. Nichols said,

“I thought it was a Trekkie, and so I said, ‘Sure.’ I looked across the room, and there was Dr. Martin Luther King walking towards me with this big grin on his face. He reached out to me and said, ‘Yes, Ms. Nichols, I am your greatest fan.’ He said that Star Trek was the only show that he, and his wife Coretta, would allow their three little children to stay up and watch. [She told King about her plans to leave the series.] I never got to tell him why, because he said, ‘You can’t. You’re part of history.’”

When she told Roddenberry what King had said, he cried.

The Church has a responsibility in a world where values, ethics and world views are shaped by narrative to ‘play’ them at their own game. Drama is not an optional extra nor a bit of entertainment on the side, nor a skit to keep folks entertained, but a fundamental part of how we communicate nowadays, in a visually saturated world, where pictures and pictographs, images, icons, logos and apps dominate.  We are back in the era of stained glass windows, where truth and public discourse are communicated through creative processes of film and drama.

God is a Creator – we are made in His image as creative people. Telling stories shapes the culture through parable, prophetic action, imagery, story, illustration, the idea that “This looks like that…”

‘Now, son of man, take a block of clay, put it in front of you and draw the city of Jerusalem on it. Then lay siege to it: erect siege works against it, build a ramp up to it, set up camps against it and put battering-rams around it. Then take an iron pan, place it as an iron wall between you and the city and turn your face towards it. It will be under siege, and you shall besiege it. This will be a sign to the people of Israel.

‘After you have finished this, lie down again, this time on your right side, and bear the sin of the people of Judah. I have assigned you 40 days, a day for each year.  Turn your face towards the siege of Jerusalem and with bared arm prophesy against her.  I will tie you up with ropes so that you cannot turn from one side to the other until you have finished the days of your siege.

‘Take wheat and barley, beans and lentils, millet and spelt; put them in a storage jar and use them to make bread for yourself. You are to eat it during the 390 days you lie on your side. Weigh out twenty shekels of food to eat each day and eat it at set times.  Also measure out a sixth of a hin of water and drink it at set times.  Eat the food as you would a loaf of barley bread; bake it in the sight of the people, using human excrement for fuel.’  The Lord said, ‘In this way the people of Israel will eat defiled food among the nations where I will drive them.’ (Ezek.4:1-13)

Think of how James compares reading the Bible to looking in a mirror:

“ Anyone who listens to the word but does not do what it says is like someone who looks at his face in a mirror  and, after looking at himself, goes away and immediately forgets what he looks like.” (Jas.1:23,24)

Think of how Nathan held up a mirror to David following his adultery with Bathsheba and murder of her husband Uriah – told via the parable of the rich man with many flocks who stole the one ewe lamb of the poor man and David’s anger.  Through that narrative, Nathan used the unfolding drama in David’s mind to lead him into an understanding of his sin, so that when the final denouement came: “You are that man!”, David was left without a response.

Think of how the Gospels are drawn from a Hebrew worldview, shaped by story, narrative and illustration, birthed in the cultural experience of small community life, of a formerly nomadic people with a rich theocratic history of shared experience.

Paul, by contrast, was largely writing within and to a culture shaped by Greek culture, and therefore the Epistles draw on Greek philosophical thinking, to explain the meaning of the cross in a systematic, propositional way, as distinct from narrative and parable. Yet nonetheless, Paul recognised the place of drawing on whatever narrative lens was appropriate to communicate truth.  One things for Jews, another for Gentiles, and perhaps for us in our day, the cultural lens of the creative, dramatic process through which by all means to reach and win some for Christ.

At SGT we have been engaged in a three year art project to re-tell Luke’s story through the medium of art,  inviting people to see their story re-imagined in a contemporary context. And we hope to build on this project with another one over the next few years, now we are calling the Gospel Soapbox project using storytelling, drama and film to re-tell more of this narrative.

Congratulations to Foolproof for flying a flag for culture-shaping through drama and story in a world where we learn more and more by what we look at, by story and drama…

Drama is not just an opportunity, it is a cultural and missionary mandate for a Church which needs to find whatever means is necessary to proclaim Jesus in today’s world.